I thought about something constant in every post, because we are somewhat behind with all of our posts. So we will now start every post with a set of bullet points.

In Argentina in Buenos Aires.

Very tired and exhausted, since we just came from a 30-hour drive by bus from Chile – Valparaiso to Argentina – Buenos Aires.

In Uruguay we spent our first couple of days in Montevideo, where you could already get a glimpse of the market as well as the drummers in our last post. After that we went to Punta del Este, a well-known travel destination in summer.

Not often were we so disappointed from a place as we were from Punta del Este. As it seems, in winter it is just a abandoned place which still has feeling of who is spending their vacation here in summer. Many skyscrapers, 5-star hotels and expensive boutiques, plus supermarket price that even let Montevideos prices look puny. At least the beach was pretty and worth seeing. 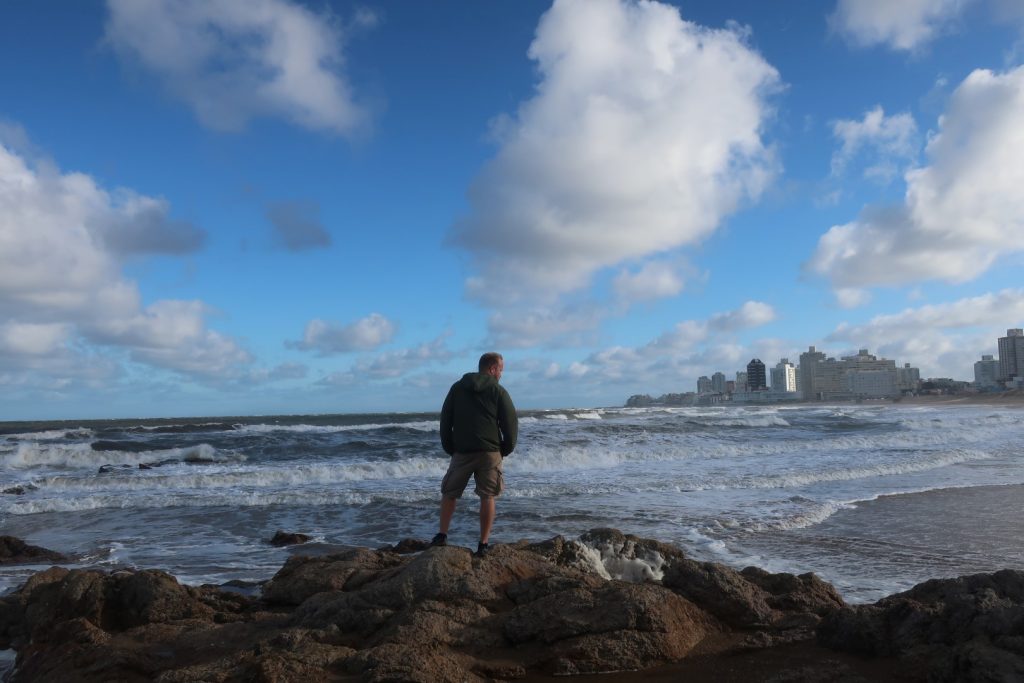 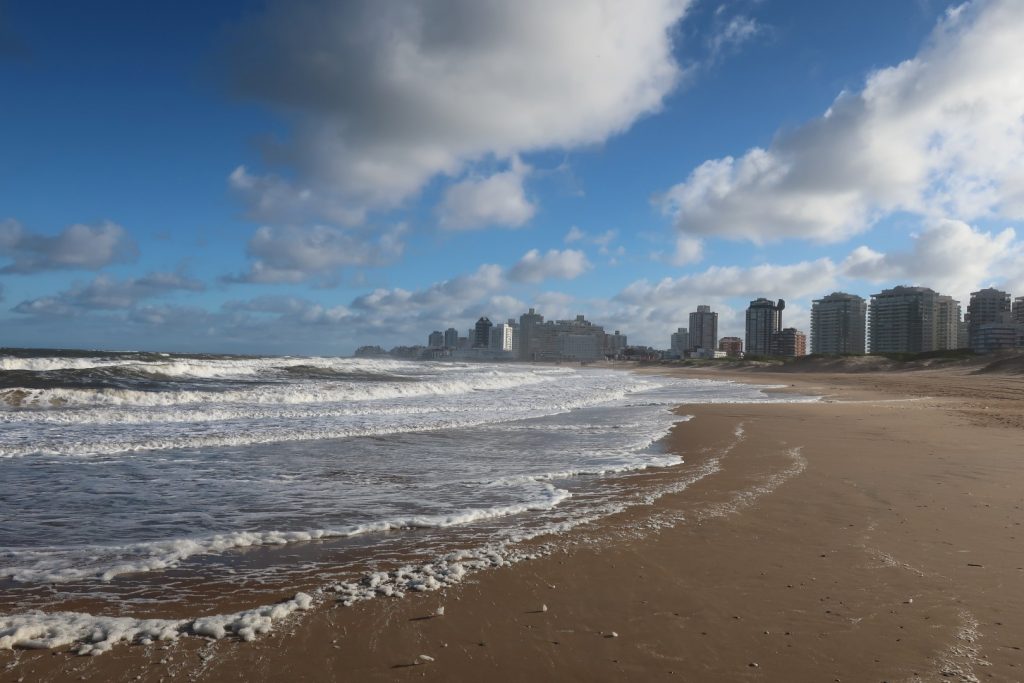 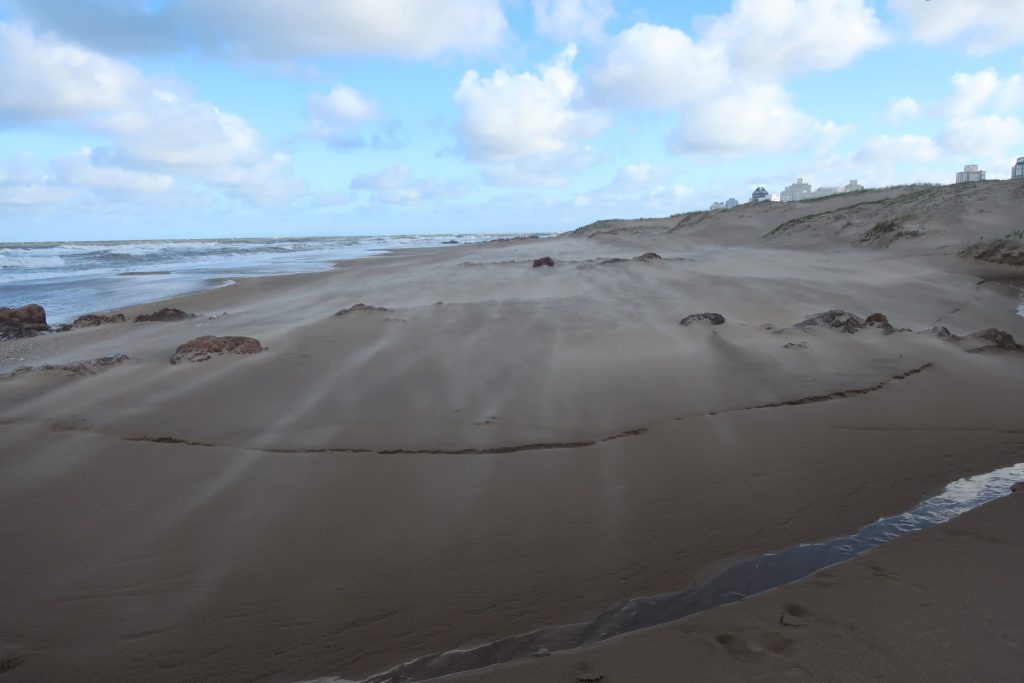 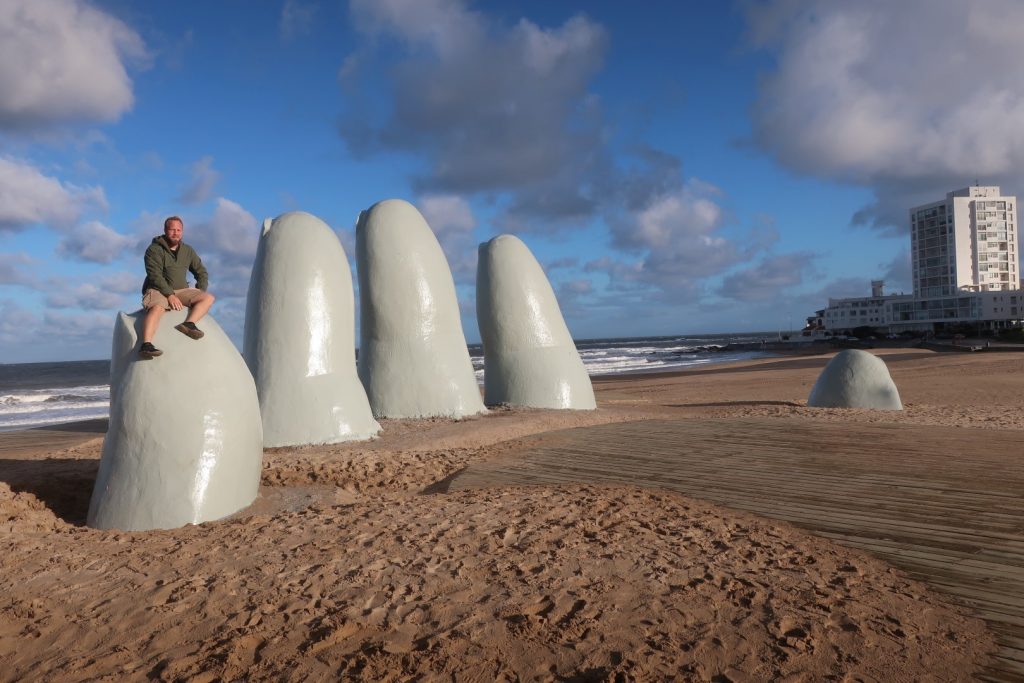 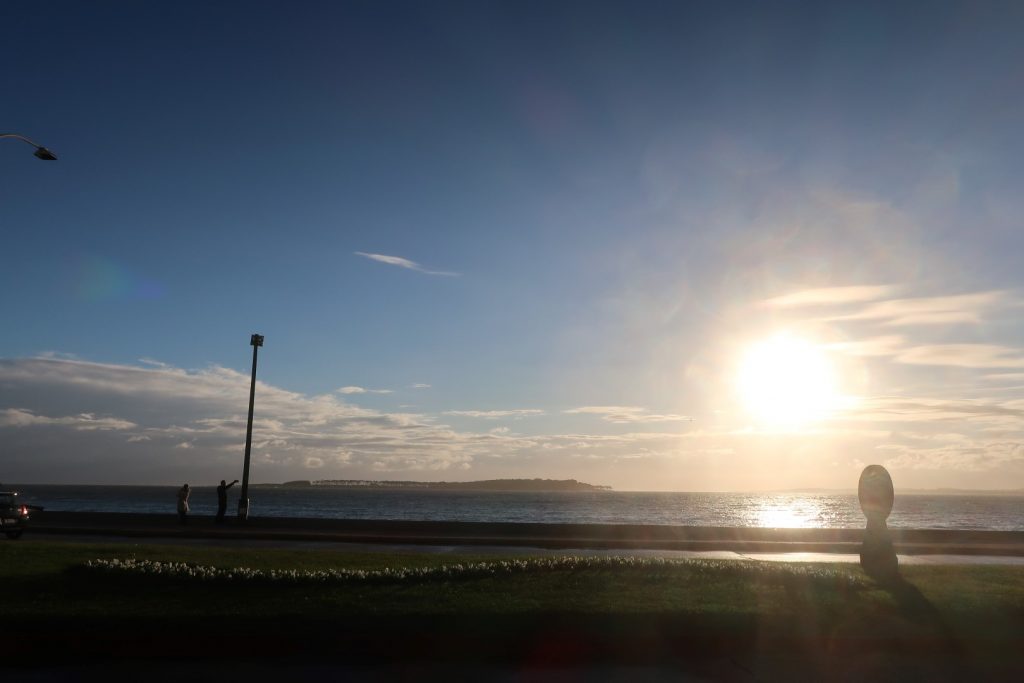 Also our Hotel (Hotel F&F) was pretty nice, with a nice breakfast and nice roomie 🙂 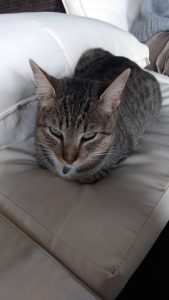 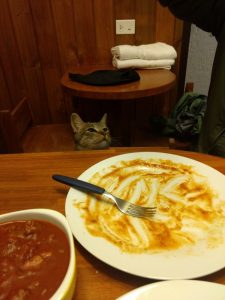 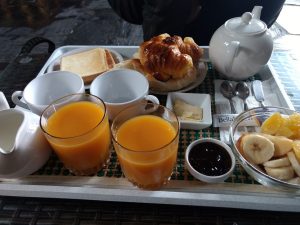 We even met some people from the town in Germany in which I work in, and it turned out they are friends of a friend of mine. Small world. They are currently travelling per motorcycle, so if you’d like, why not pay them a visit on their homepage (it’s in german, though): http://www.tierramoto.de 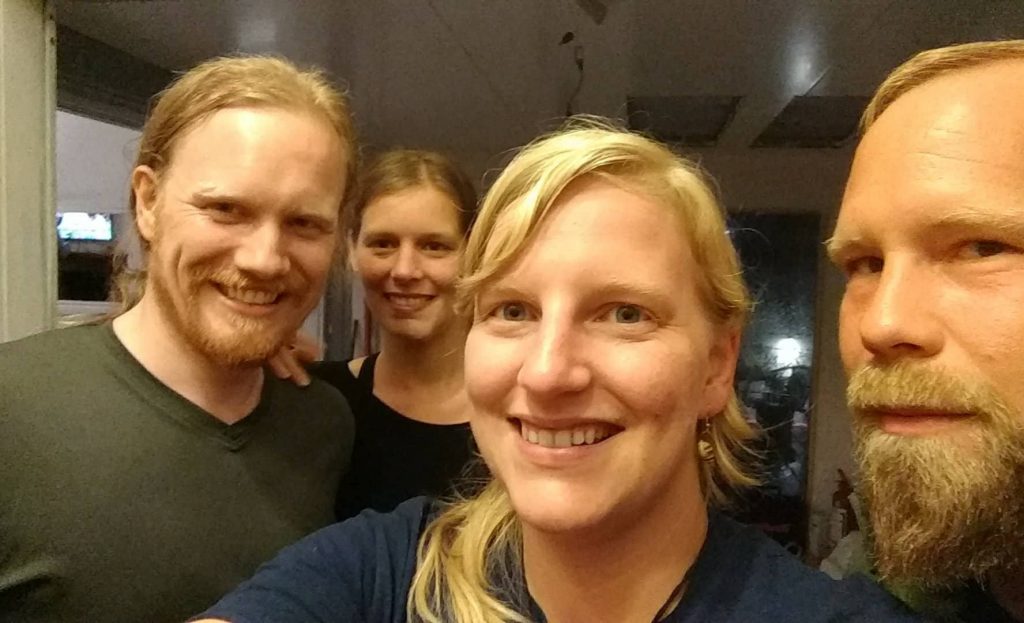 But after two nights we were very happy to move on and go to the coolest place we have found while travelling Uruguay. 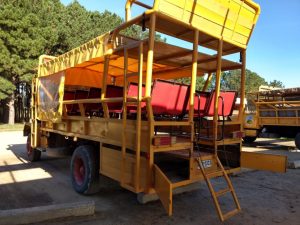 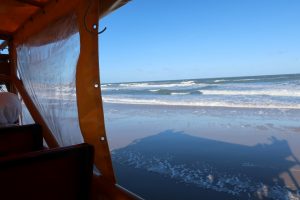 In summer about 3000 tourists visit Cabo Polonio per day. In winter… well, about 20.

Interesting is also that in Cabo Polonio, there is almost no electricity and Wifi, so that is something new as well. 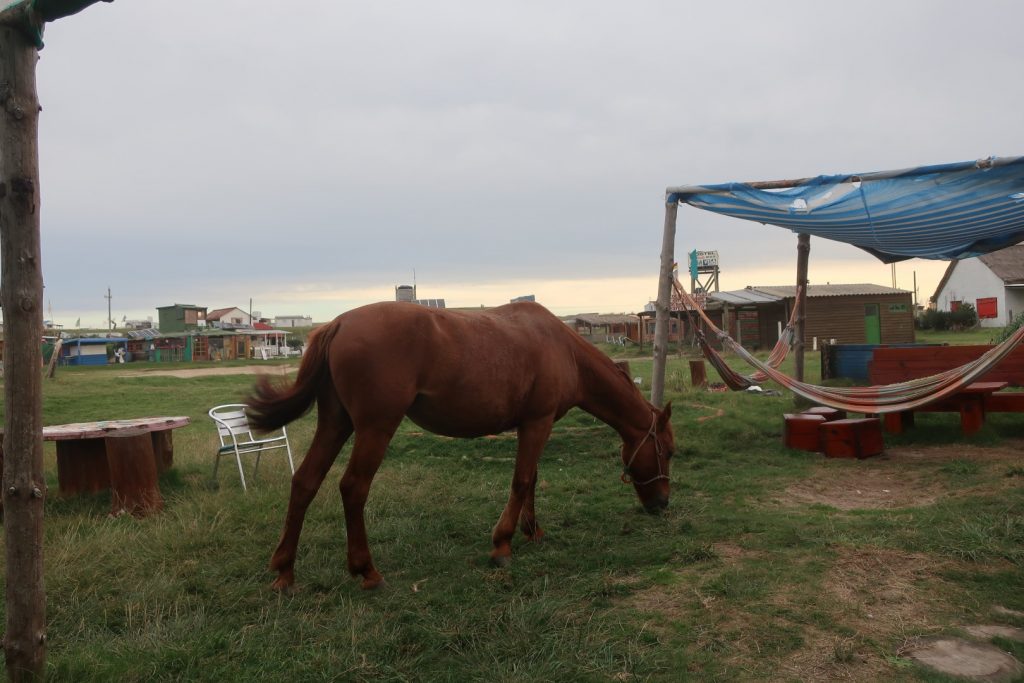 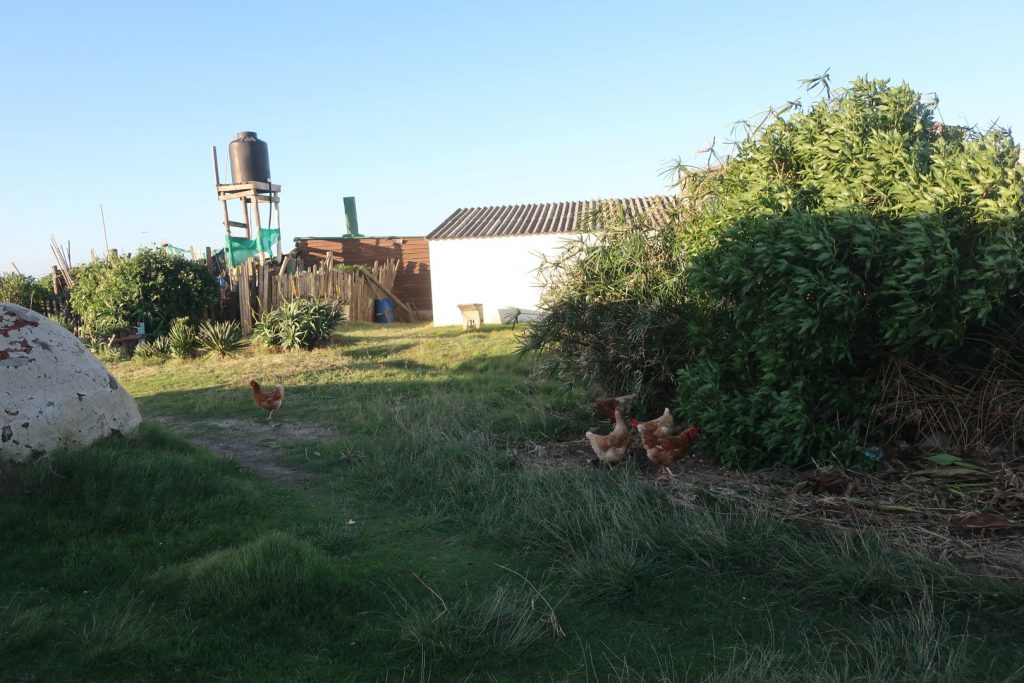 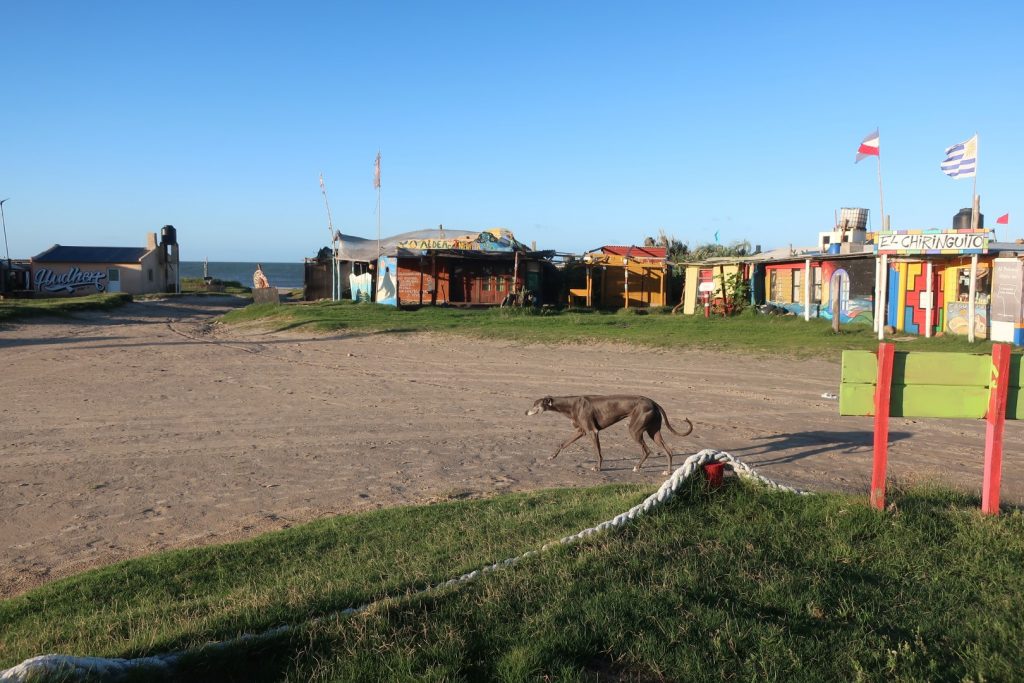 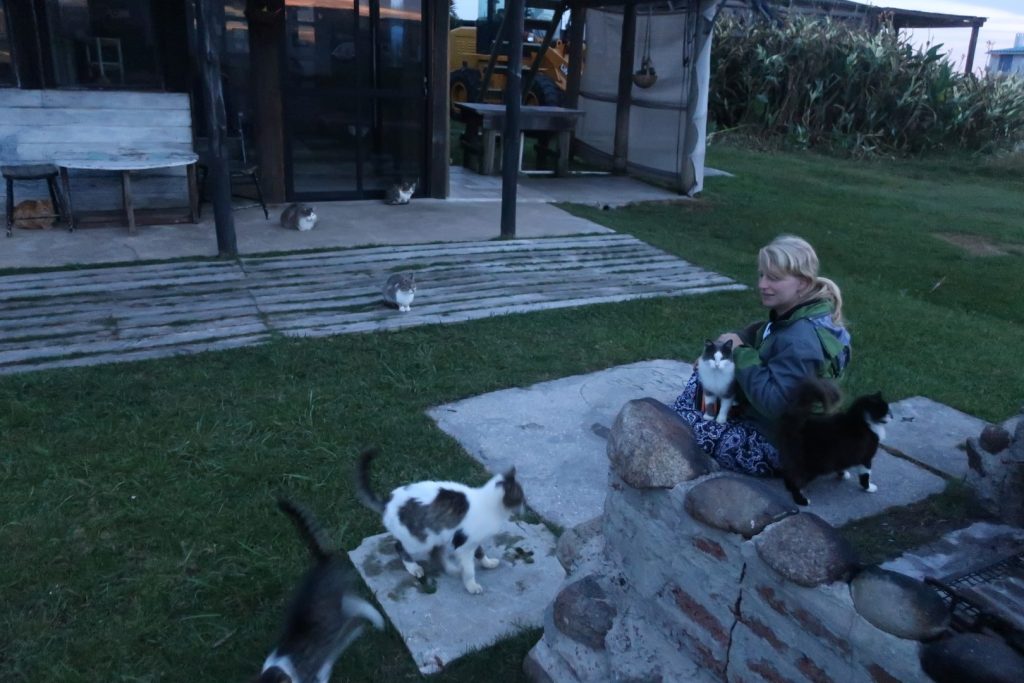 Our Hostel “Viejo Lobo” was one of our best experiences, which we have made with Hostels so far. The people were unbelievably kind, we were in one of the only occupied hostels. In the evenings we cooked together for small change. It was just an awesome atmosphere with the best barkeeper in the world. 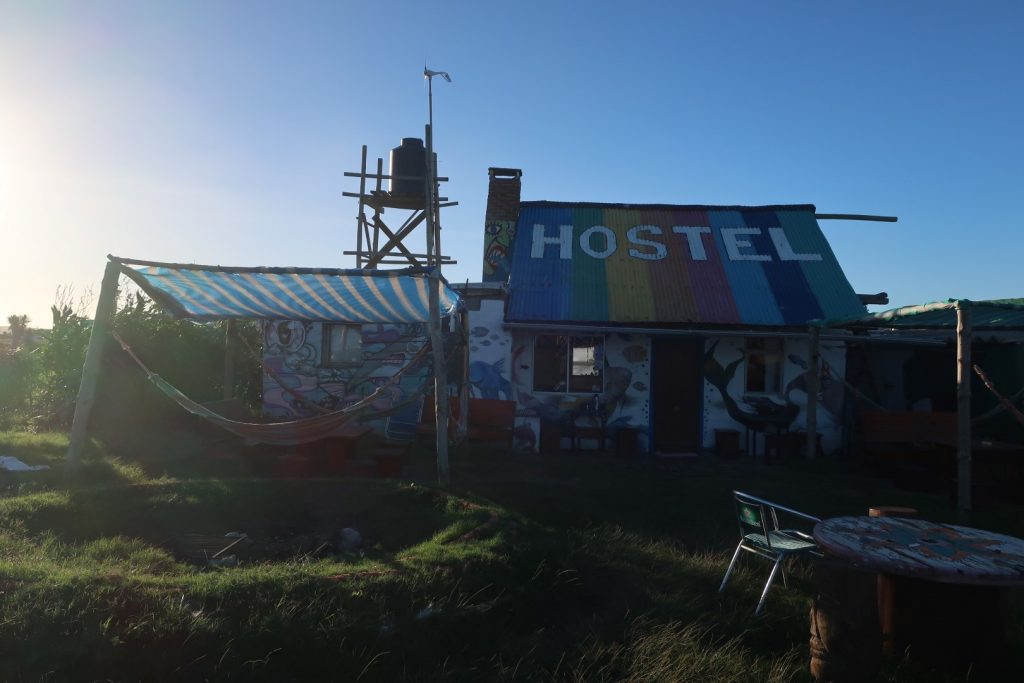 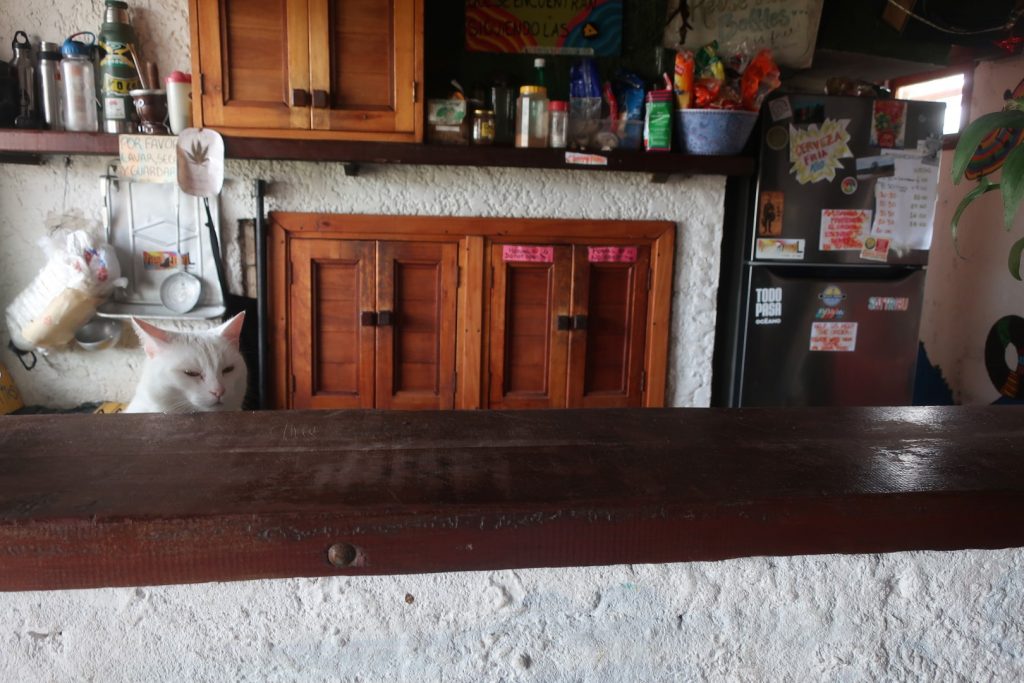 I also one day made some stickbread (selfmade bread dough around a stick) and we all sat around a bonfire and prepared the stickbread over the fire. The personell of the hostel cooked some more food and we ate all together like a real family dinner.

In Cabo Polonio there are Lobo’s (Seals), which you can watch absolutely free of charge. In most of the south-american countries so far there was NOTHING for free. Which was why we were even more excited to see the lobos for free. 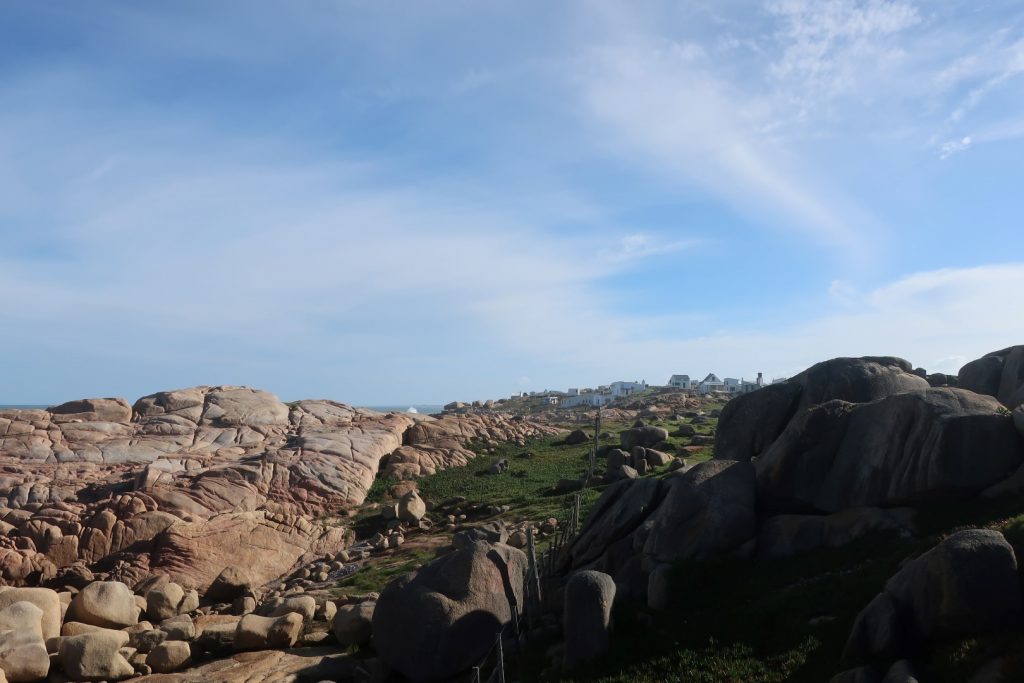 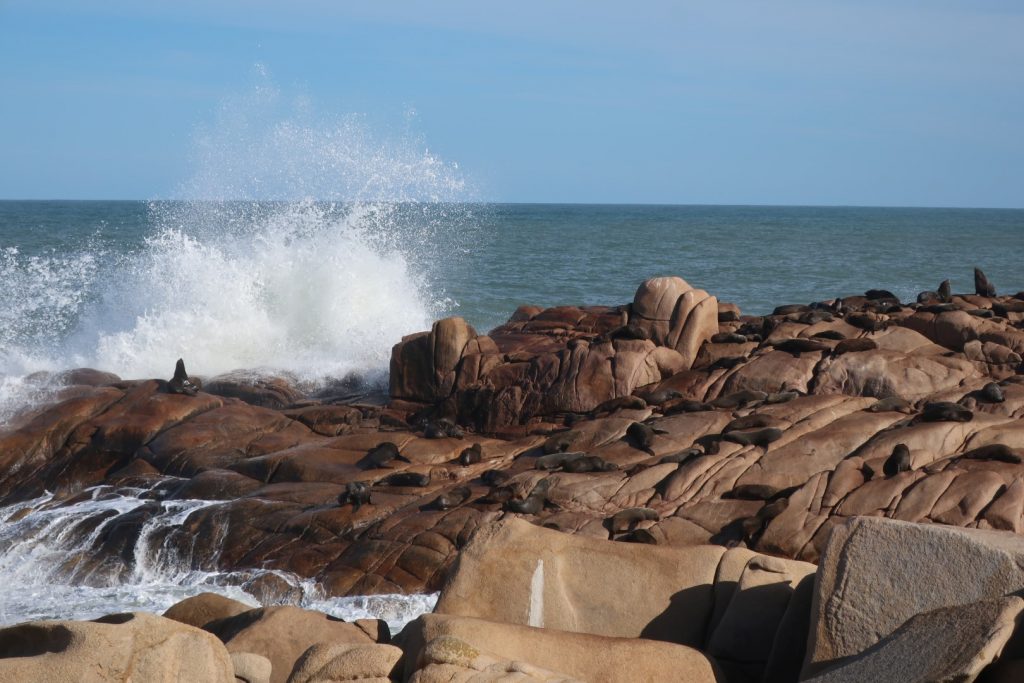 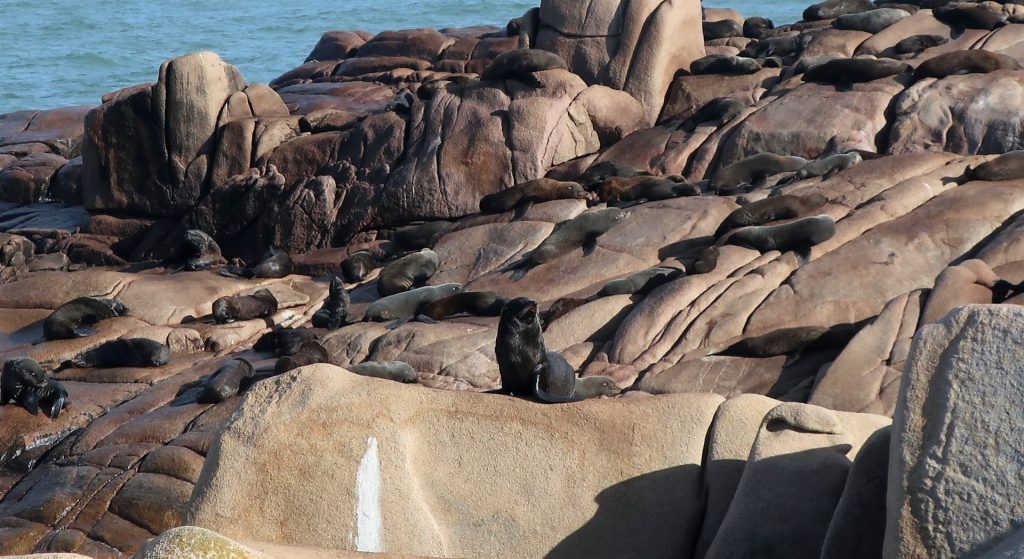 Even though it was really cold in Cabo Polonio, we were happier to be there in winter than in summer. The almost complete solitary feeling you have was something really fascinating and relaxing. The lighthouse which could be seen from almost everywhere completed the picture. 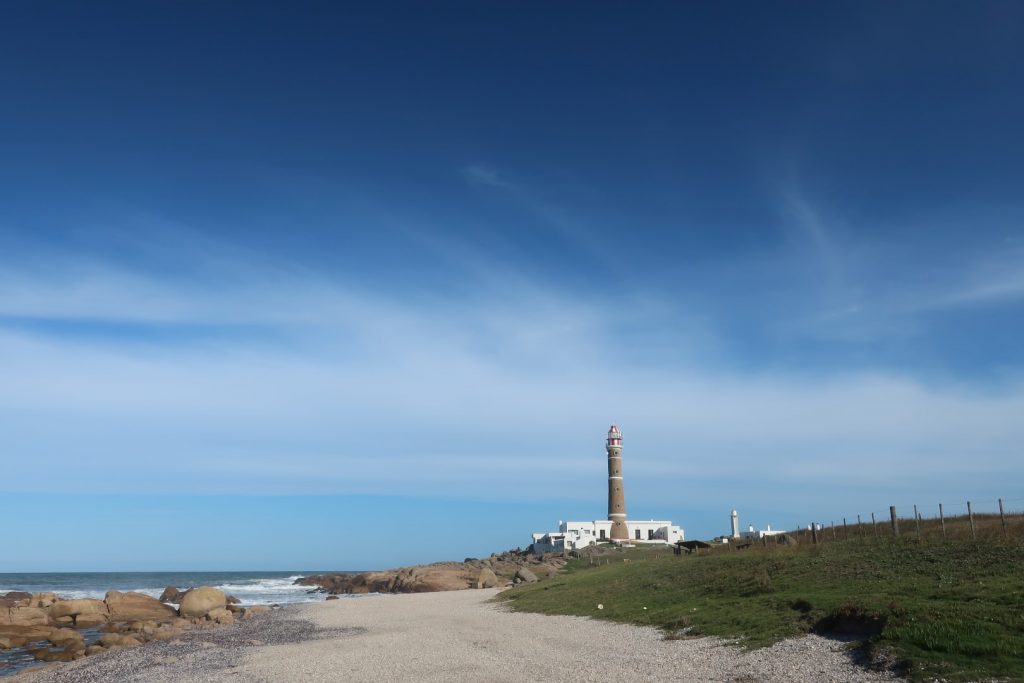 Unbelievably many streetdogs were to be found in here. But they weren’t as aggressive as for example the dogs we’ve seen in Peru, but really kind dogs which often spent the whole day with us. 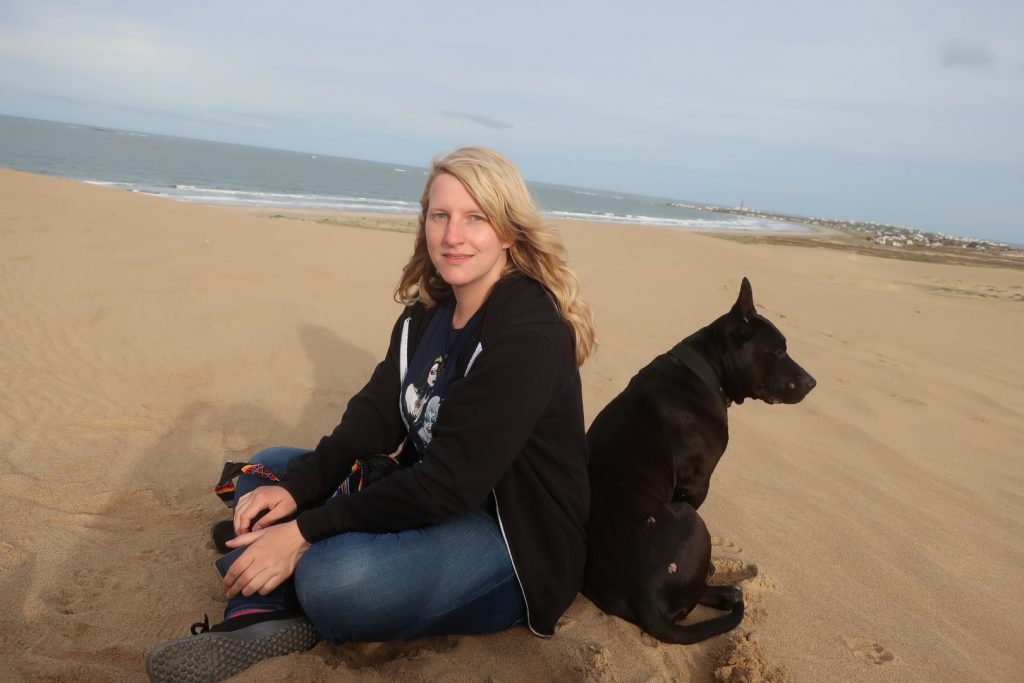 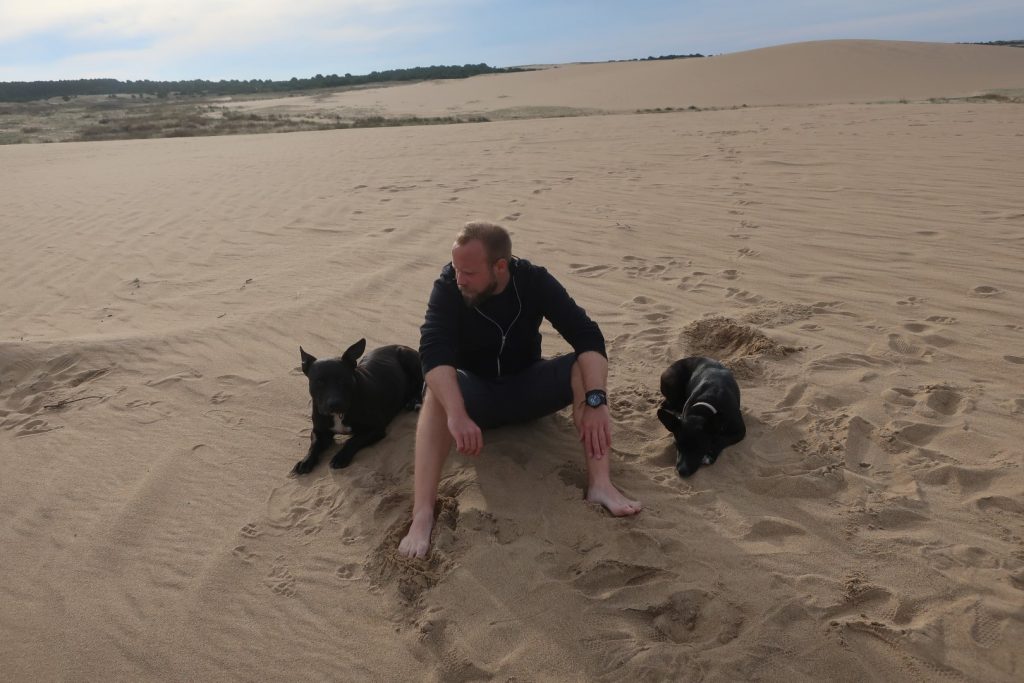 I believe we have also seen the most gorgeous sunsets in Cabo Polonio. These also took a lot longer than in Germany, about an hour we had bloodred skies. 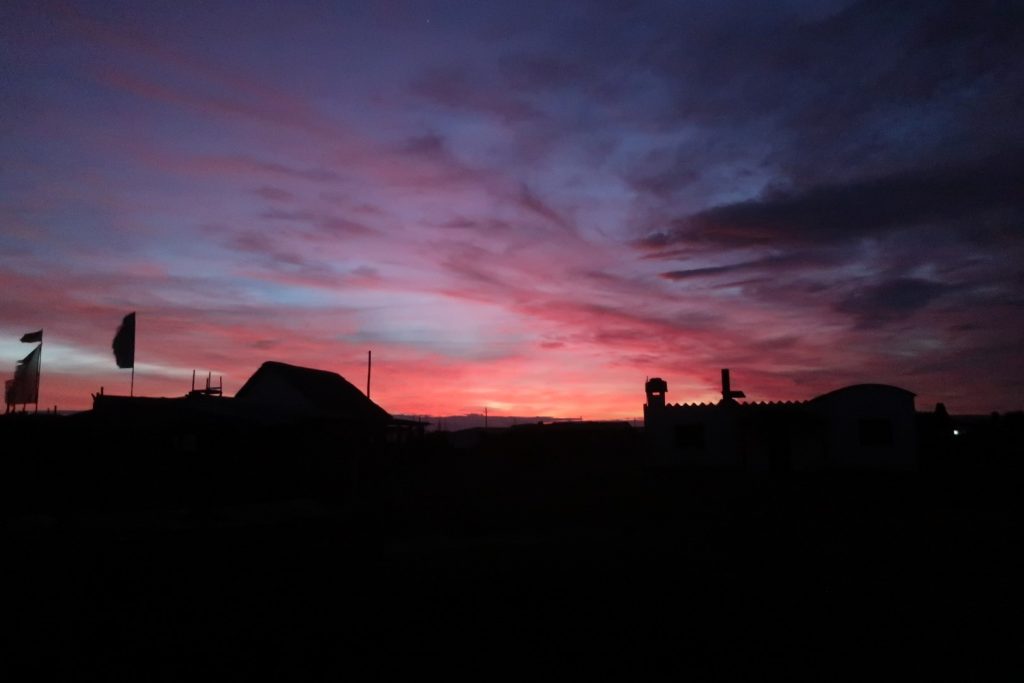 The most crazy thing about this place was the supermarket. This looked rather like a metal goods store from the last century. The old man there has probably been working there for the last 60 years and the walls were full of different kinds of food. These foods ranged from pasta to chees to beer, almost everything you need could be found here. And even though this was the only supermarket, it wasn’t even more expensive than elsewhere. 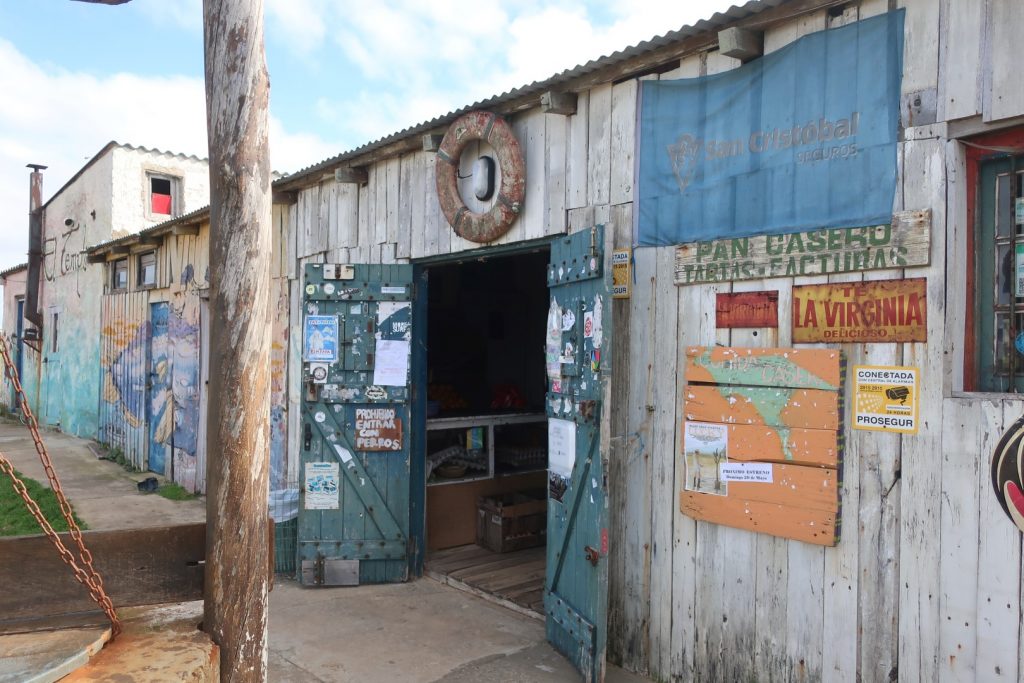 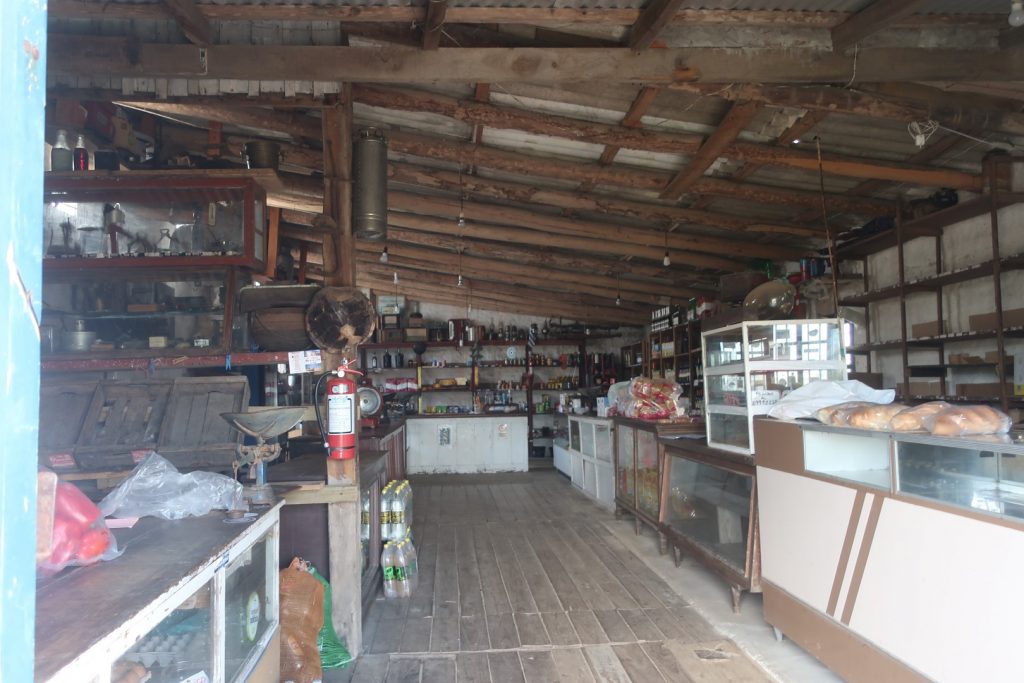 Cabo Polonio has won our hearts, and I would recommend everyone to visit this awesome hippie-village.

Next time you’ll find out some things about La Paloma, Colonial del Sacramento and our absolutely favorite hostel (for now), so stay tuned!

2 Replies to “From Punta del Este to Cabo Polonio”