We are in Houayxay in Laos.

Relaxed, we have been on a ship the last two days and have been enjoying the ride as well as the nice scenery. After a 3 day hike with kayaking that was really nice.

Random thought of the day:

It’s always nice how things turn out on a trip like this. We booked a 2 day boat trip and nobody gives us even a hint of information about how this will go. Not even, that there is no food or drinks included, and that there will be a stop in between where we should probably book an accomodation. Oh well, go with the flow and all.

Our last post was about our time in Paraguay, in the beautiful atlantic rainforest.

From Paraguay we moved on to Salta, which is a really big town with many people and not soooooo much to see. But around Salta you can find a lot of nice places, which are not accessible by bus. So what’s the alternative?

Exactly, a roadtrip <3 Yeaaaaaaah, Roadtrip! And that's what we did, a car was quickly found, which we have rented for two days. 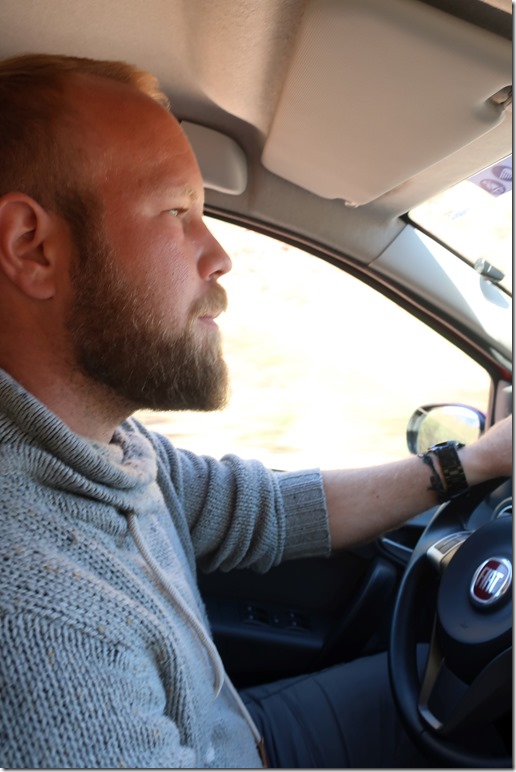 Let’s go to the Saltdesert

The most important thing for a road trip is, of course, substinance. Which is why we went to town and got ourselves some sandwiches first.

The first day of our road trip was quickly planned, as only a couple of hours from Salta, there was supposed to be a salt desert named Salinas Grandes de Jujuy.

So we started our journey to there and stopped relatively quickly at a pond, which we have seen on the map. Because that is exactly why a road trip is so nice, anywhere you find it cool you can just stop.

It was also a very nice stop, as you can see. And soooooooo quiet. 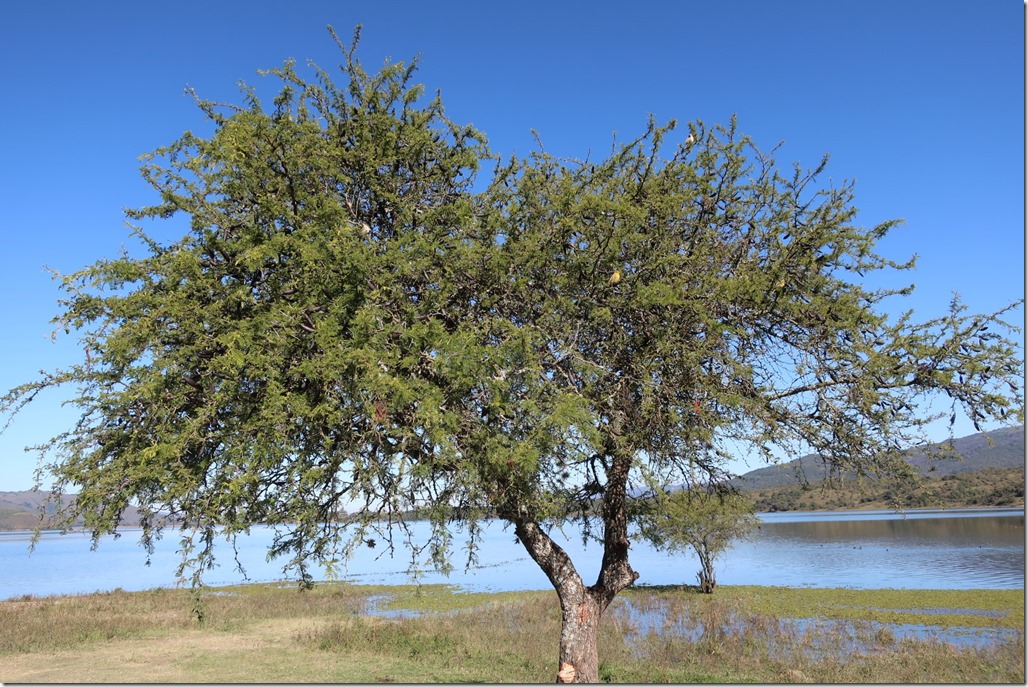 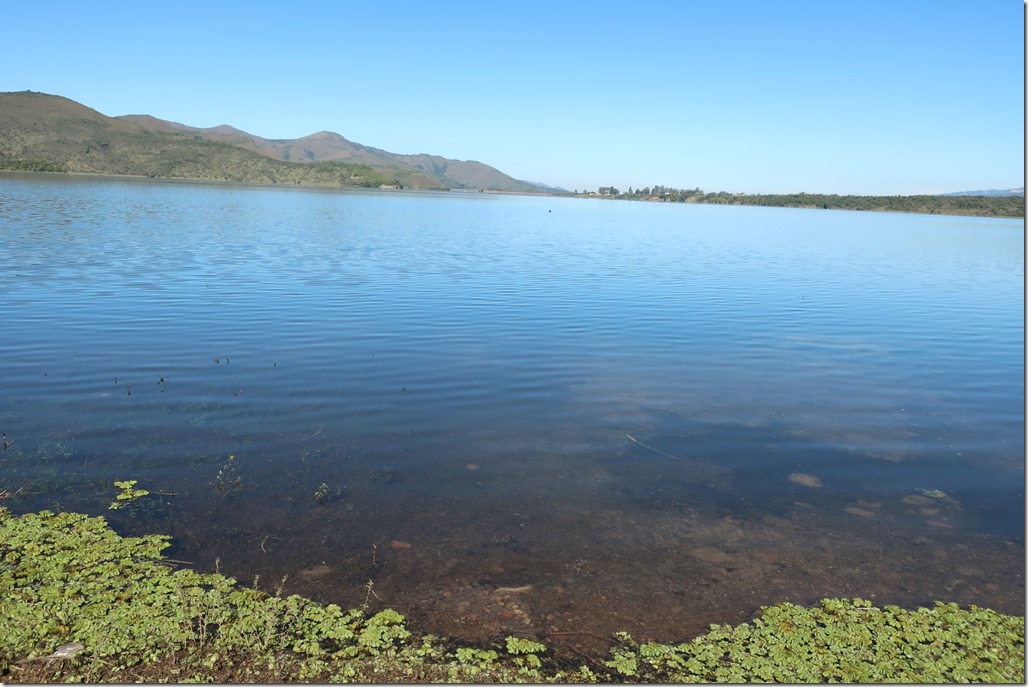 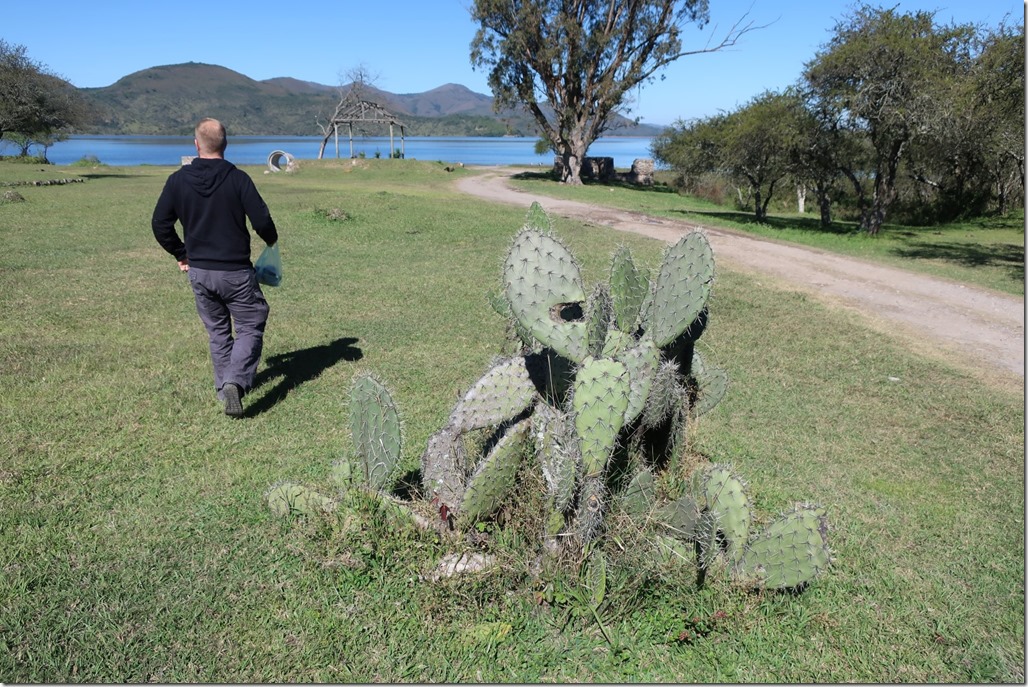 It was actually so pretty there, that Björn let half if his very yummy sandwich fall to the ground…

So, half refueled, we continued on and went through beautiful landscapes and even saw the colorful mountains “Cerro de los Siete Colores” behind the city Purmamarca. 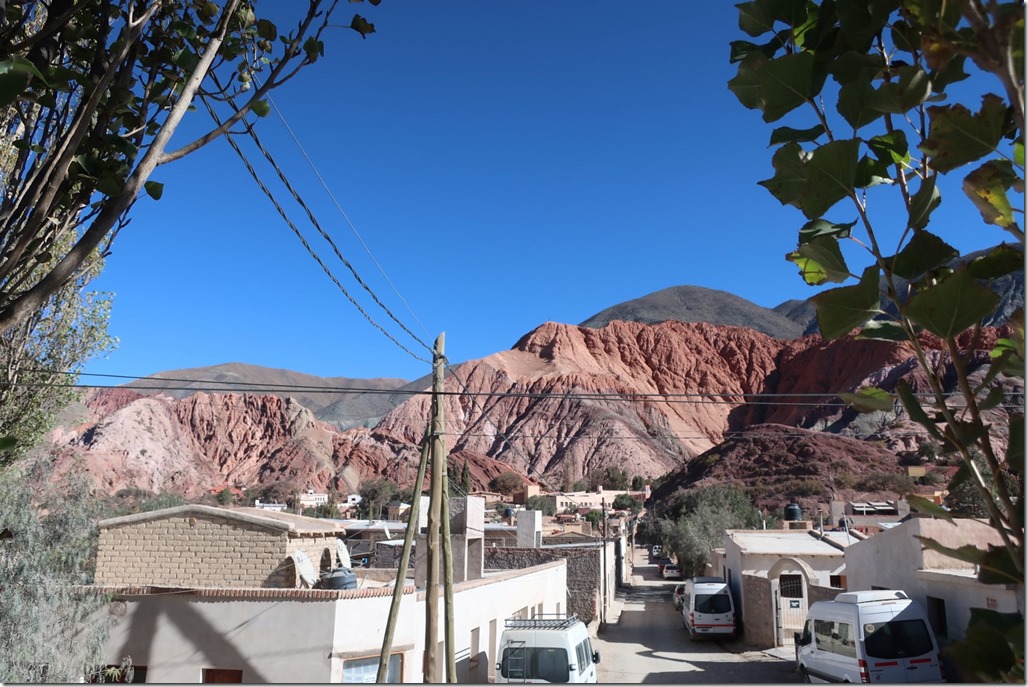 Hitchhiking through the desert – but please don’t kill us

In Purmamarca, there was a hitchhiker on the side of the road. Judging by his uniform he seemed to be a policeman.

Björns awesome idea was, to take him with us. He argumented that he is a policeman, so he wouldn’t do anything.

I had my moms words in my head, which said: Don’t ever take a hitchhiker with you. Also I was thinking of some reports of some people, that know someone, who is related to someone, who has an acquaintance, who’s brother in laws sister has been cut into pieces by a hitchhiker and has been spread out in the forest.

Since my argument, that every massmurderer is able to put on a police uniform, was falling on deaf ears, Björn won and we took him with us. He wanted to go to the same desert as us, so that just fit perfectly.

His english was rather non-existent and our spanish was not good enough to have an in-depth conversation, but it was enough to find out that he is indeed working as a policeman (or so he said) and that we could have a little bit of small talk. The times we were not talking I had some time to think if I could disarm him quick enough, should he draw his weapon on us and if I had lived my life to the fullest.

A little music should take away a bit of the silence, and since there was no radio signal, my rather slim music selection on my phone was needed. I asked him what kind of music he likes, and he told me he likes all kind of music. Folkmusic but also Rock and other things. So I thought, “let’s try some Metal”. Although he said it was quite good, the pained expression on his face told a different story. So I decided for a more digestable Alternative/rock music and we kept on driving.

At some point we came near the desert and I was thinking about the corruptness of the south american police. Maybe he would give us a “get out of jail free” card? Well he didn’t, but I remembered his name. Although I am not sure, that it would’ve helped us, to tell some police officer we were friends with Daniel. But who knows.

A short distance from the Salina Grandes de Jujuy we let him out of the car as requested, in the middle of nowhere, where he sincerely said his thanks to us. We watched him a little, to make sure he is not secretely following us and to eventually end us, but he walked into the middle of the desert and disappeared into the vastness.

Finally at the Salinas Grandes de Jujuy, we found a place with access to the salt desert. There was a guide offered to us, but what is the sense in coming alone with your own car, and then doing a tour with someone. Unfortunately the way to the desert was blocked, and it seemed they wouldn’t let us in like that.

So we drove on and found… no other access to the desert. So we had to get back and find out that you could only get inside with a guide.

We asked them how this was supposed to work, since we have our own car and don’t need a guide. They told us that we needed a guide and that it is no problem. They join you in your car. So an old argentinian lady came out of a hut and got into our backseat.

With her limited english she was driving with us and told us some things about the salt desert and drove with us to points of interest. 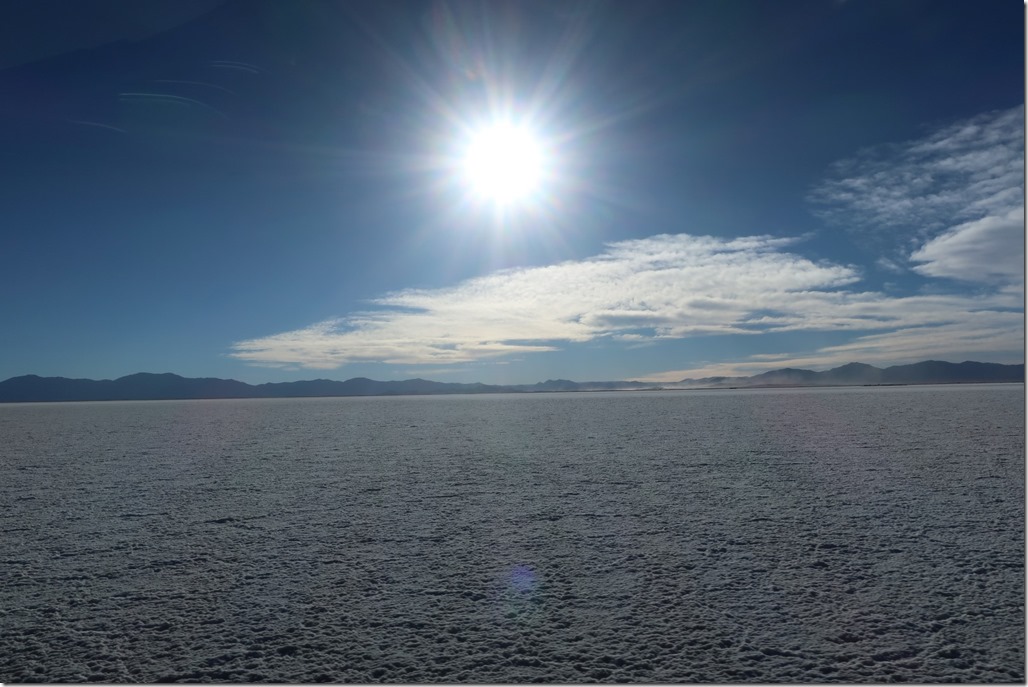 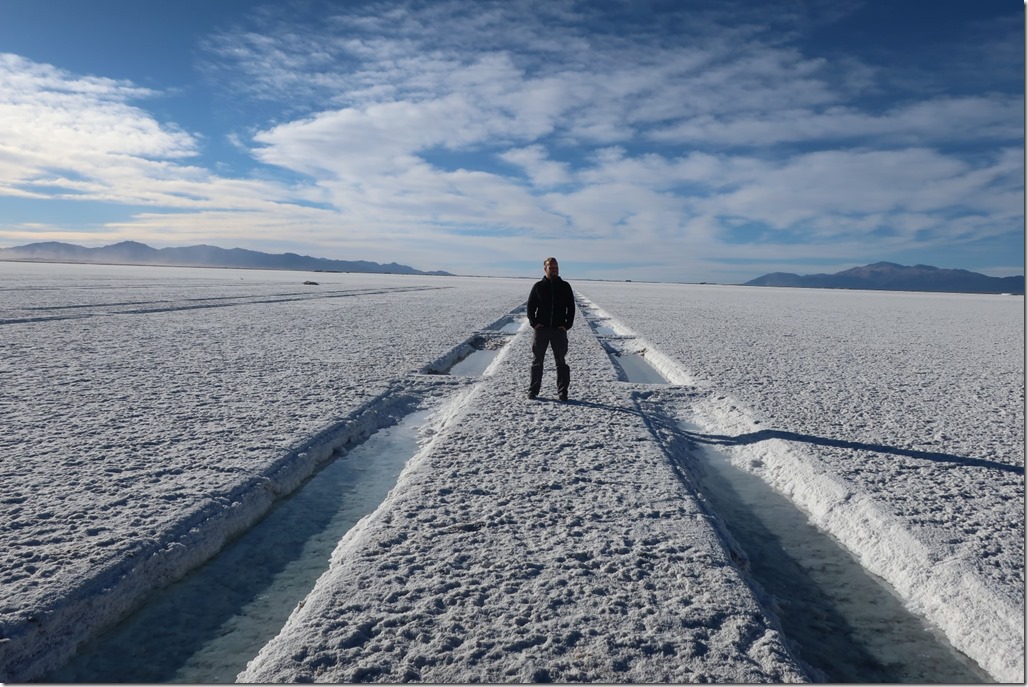 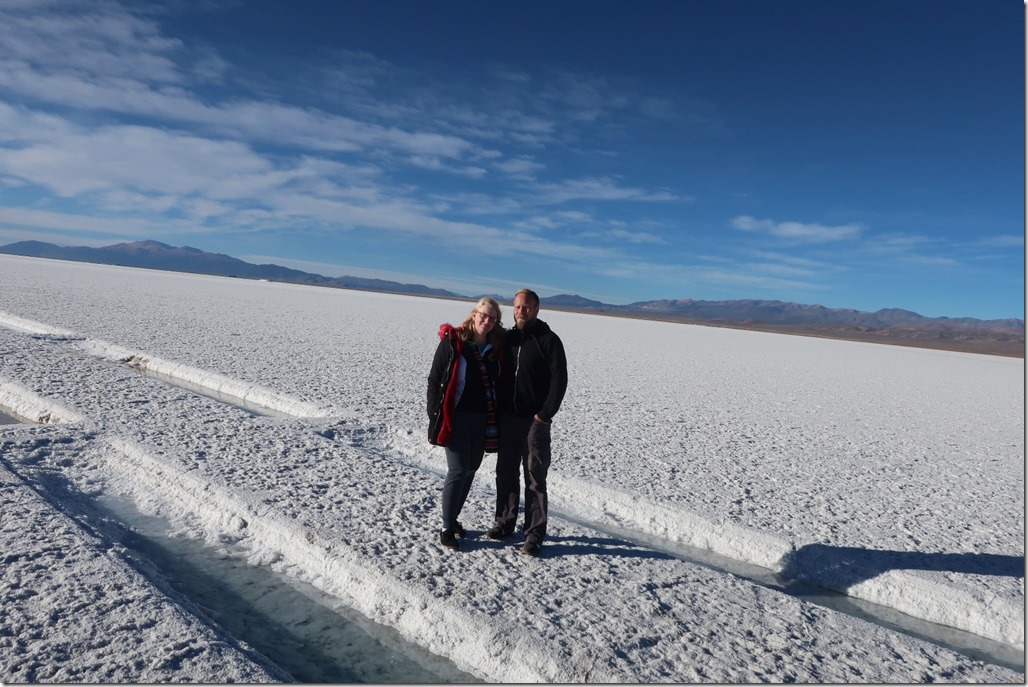 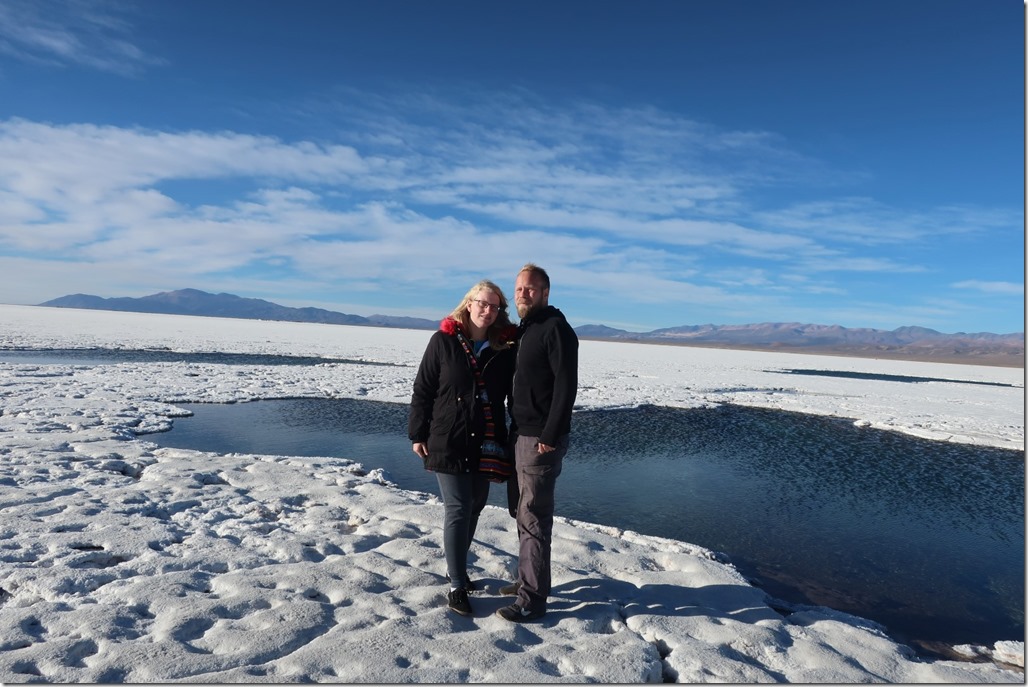 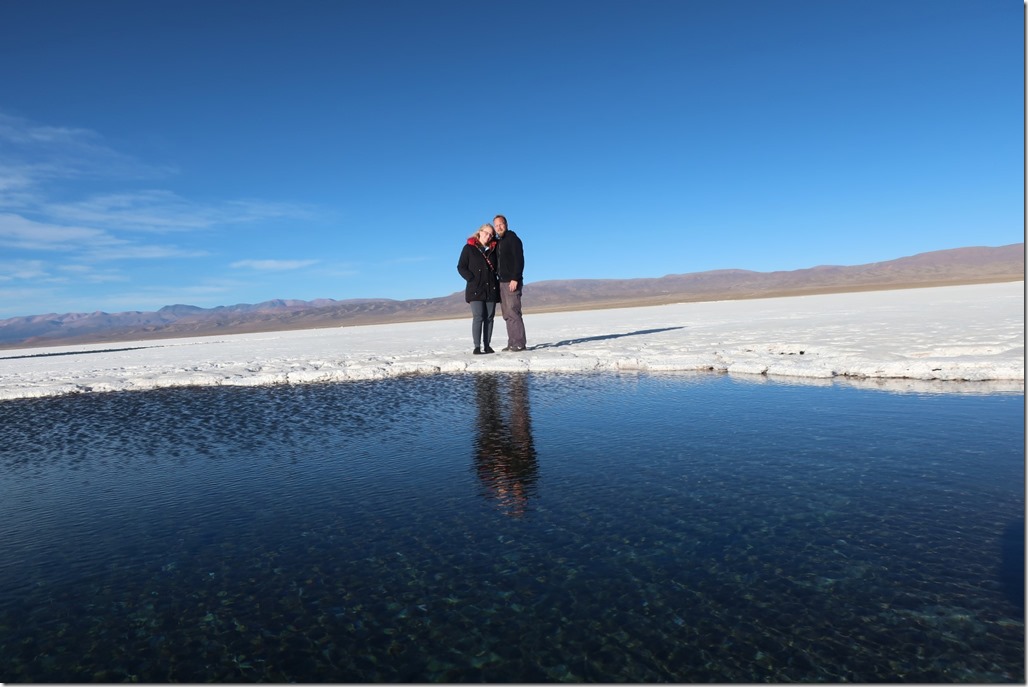 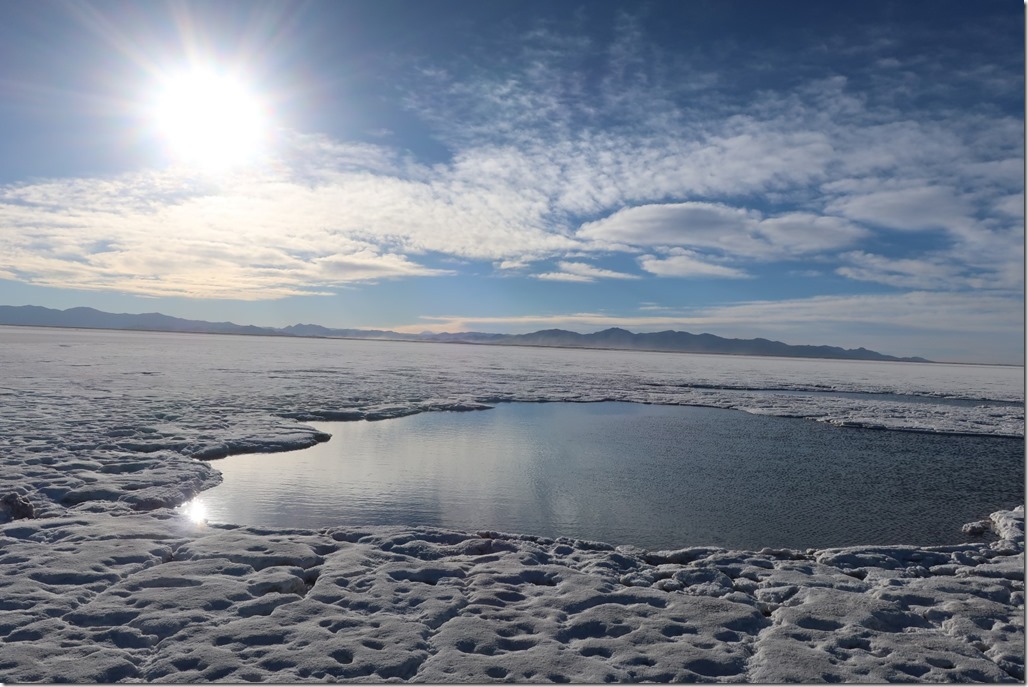 It was very pretty, but took a little to get used to driving with an unknown grandma in the car.

After the tour we got outside and looked around a little. There were even benches and tables and huge statues carved out of Saltrocks. 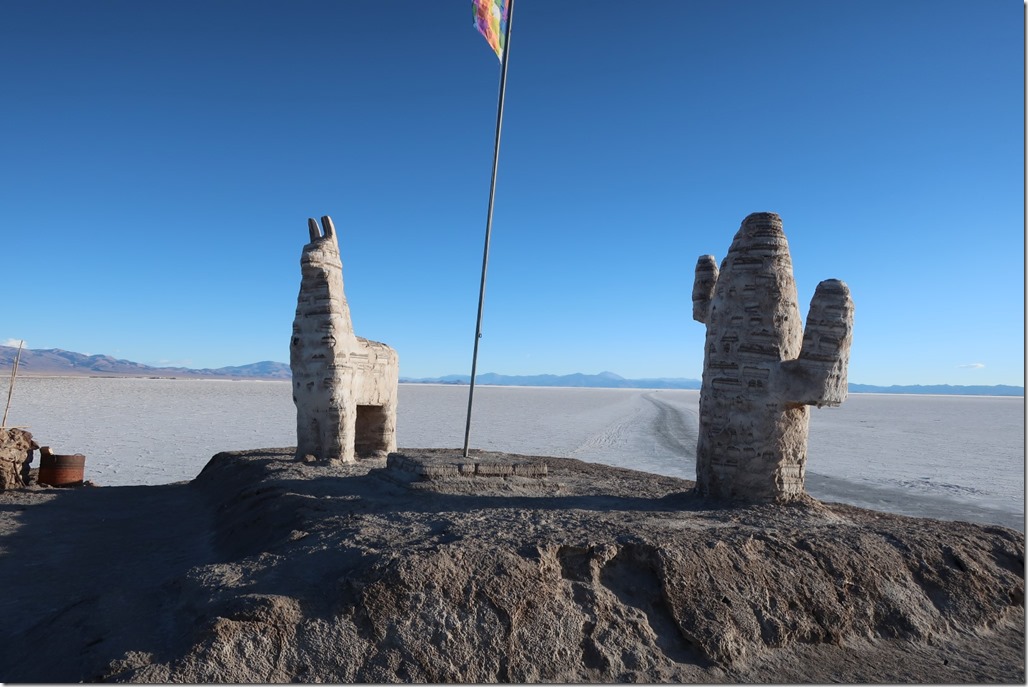 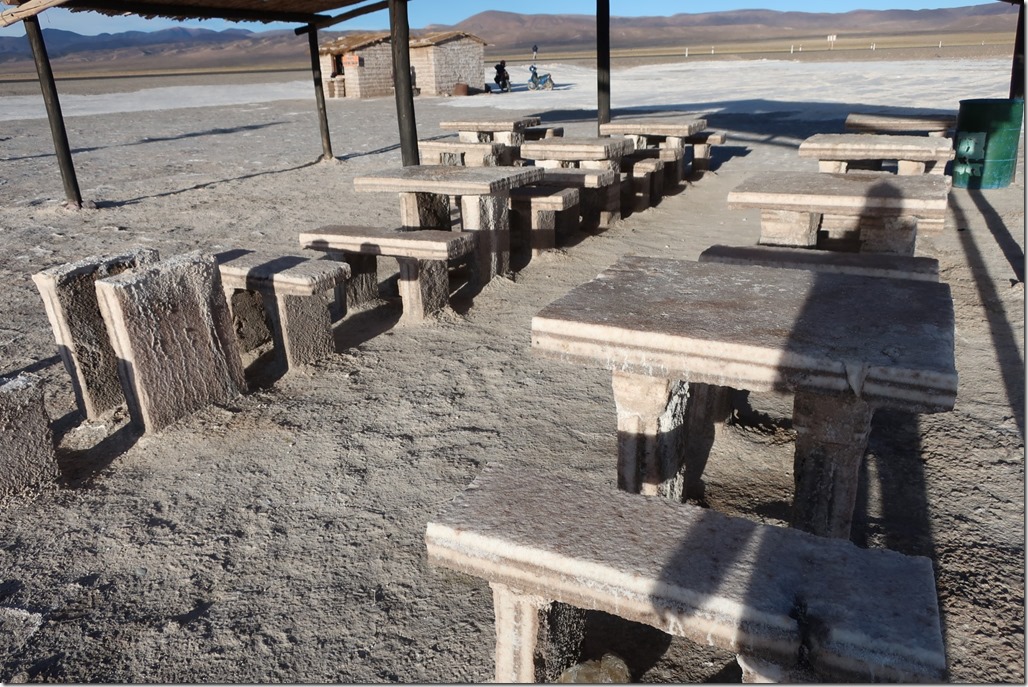 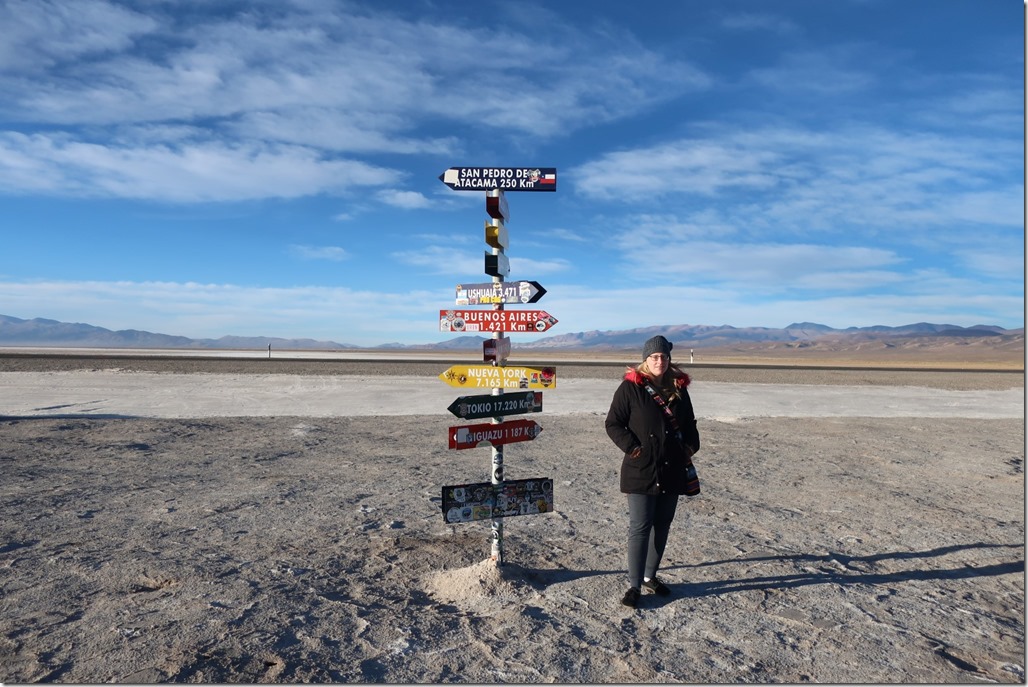 Then we went back to Salta and had a little snack on the way back. 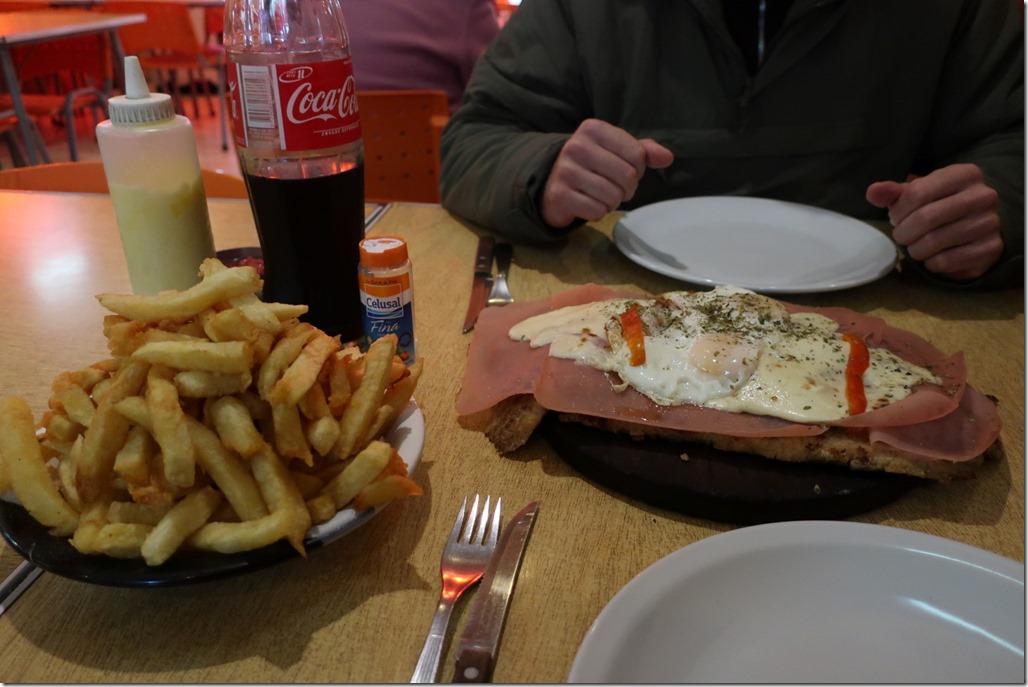 Day 2 – Beautiful views and not sticking to the schedule

On the second day our road trip continues, we wanted to go to Cafayate. Since we were not the best early birds, we got on the road pretty late. On the way, we found a lot of things to see. The road itself was already beautiful, and everywhere there were signs to other sights. 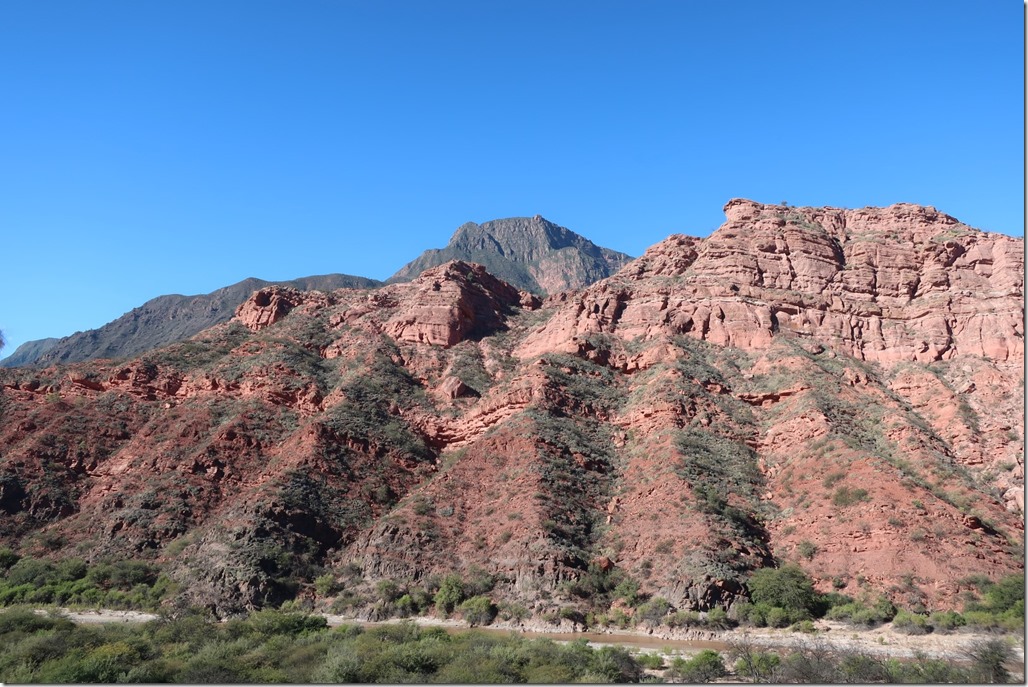 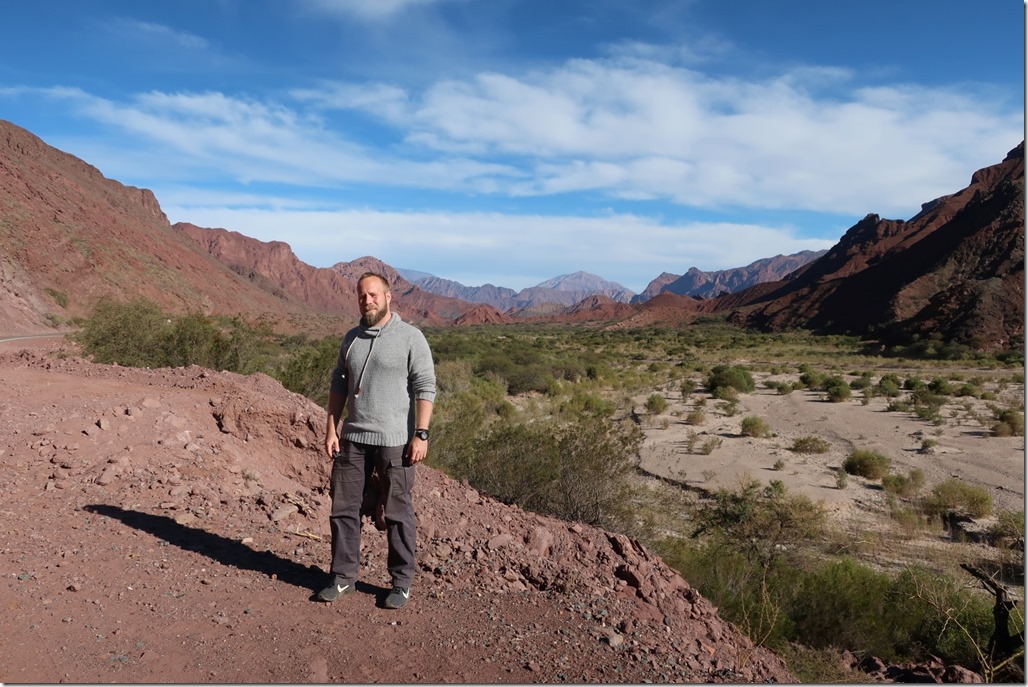 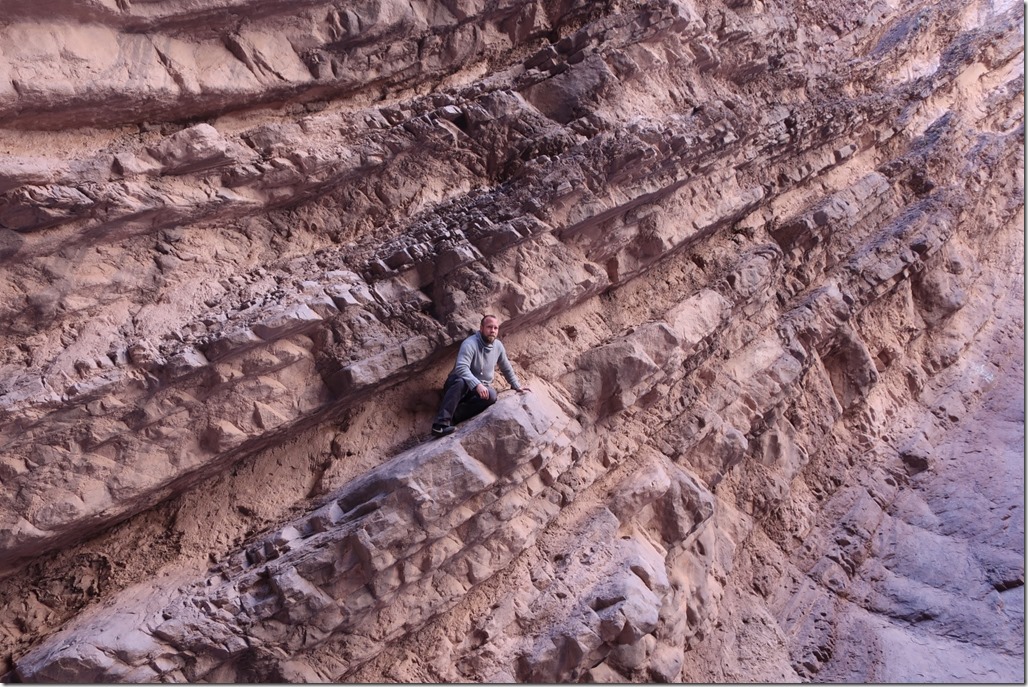 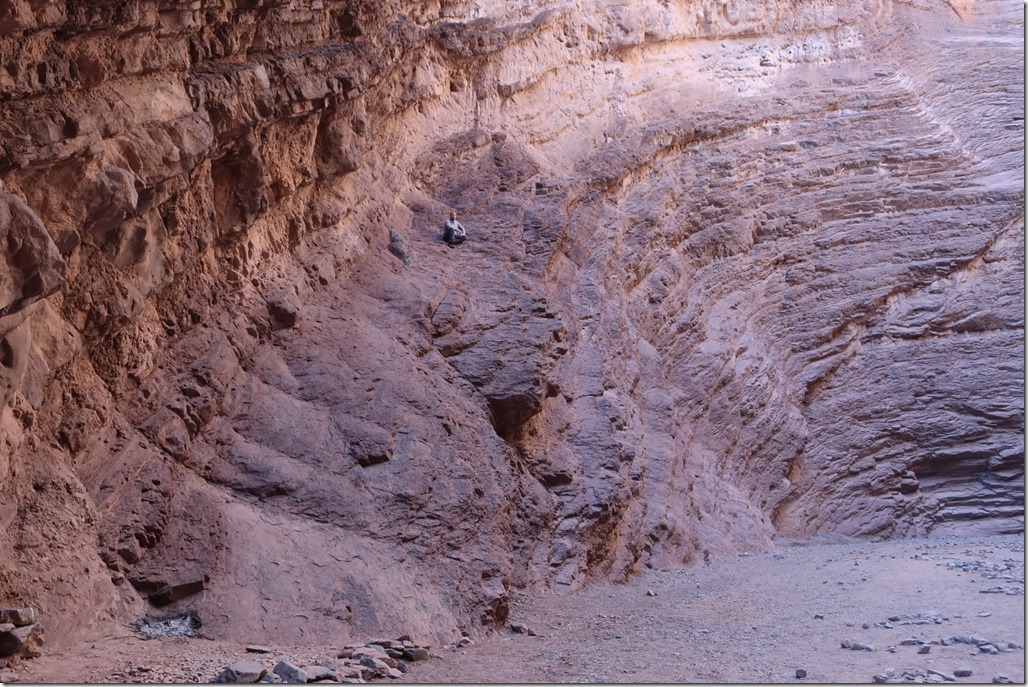 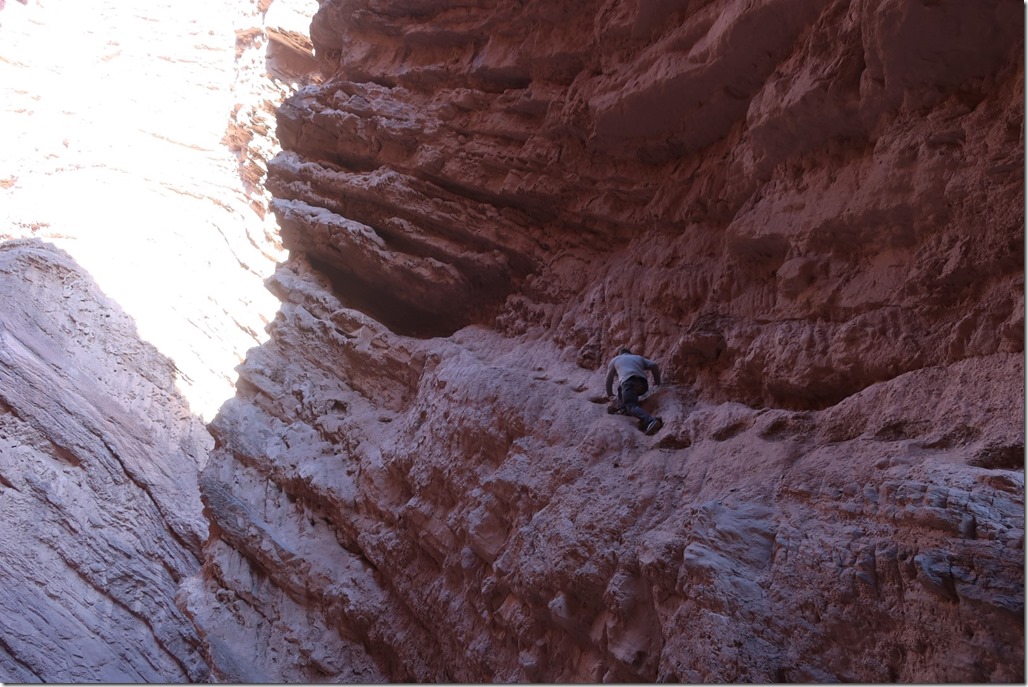 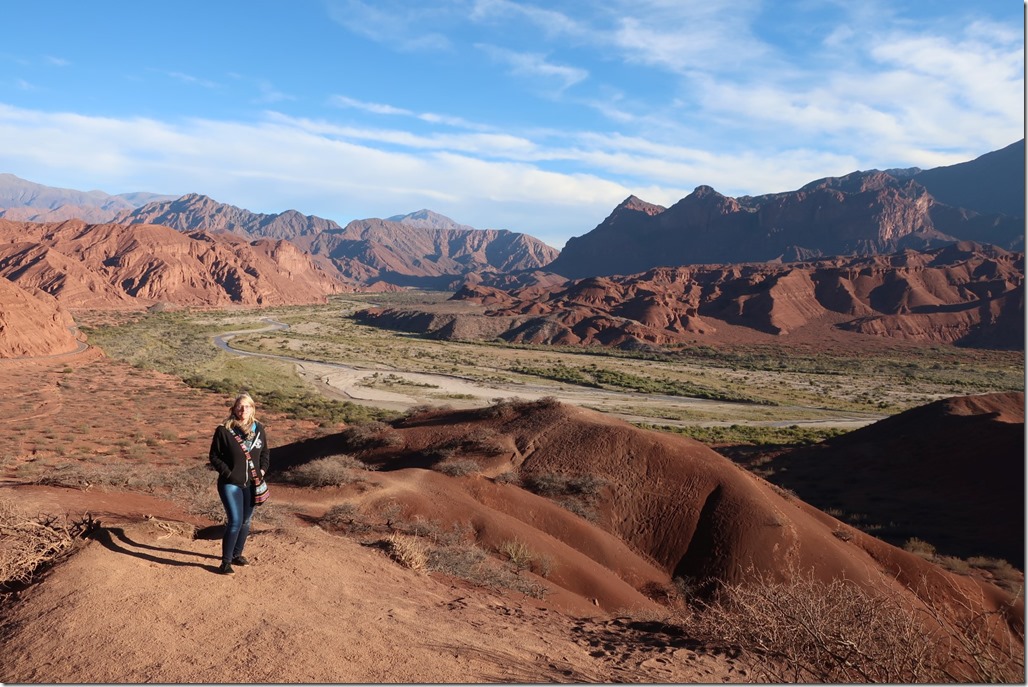 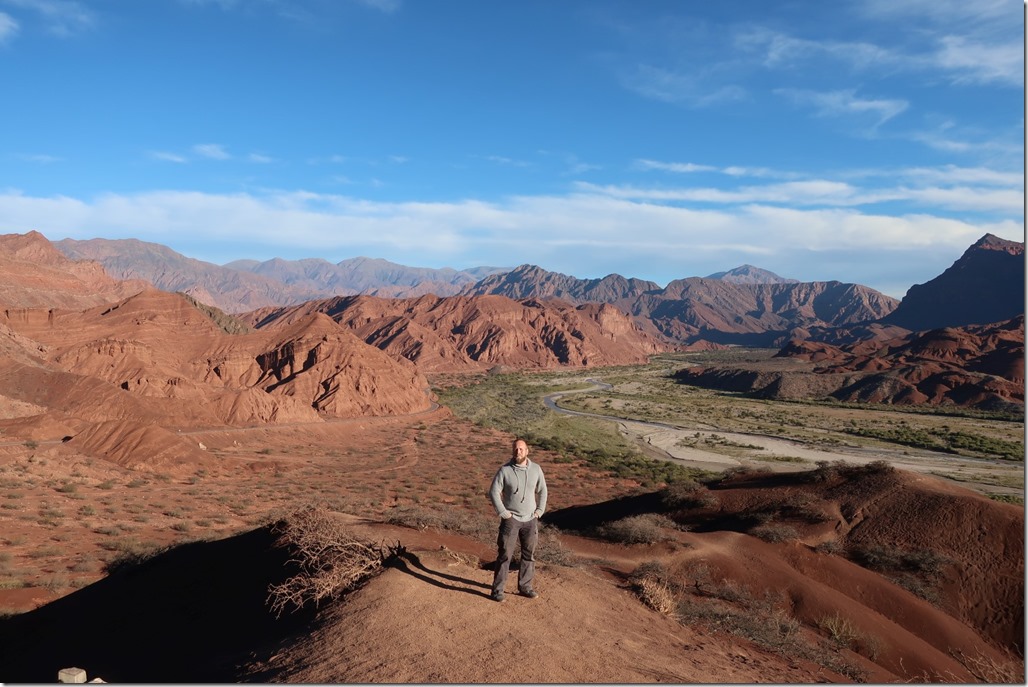 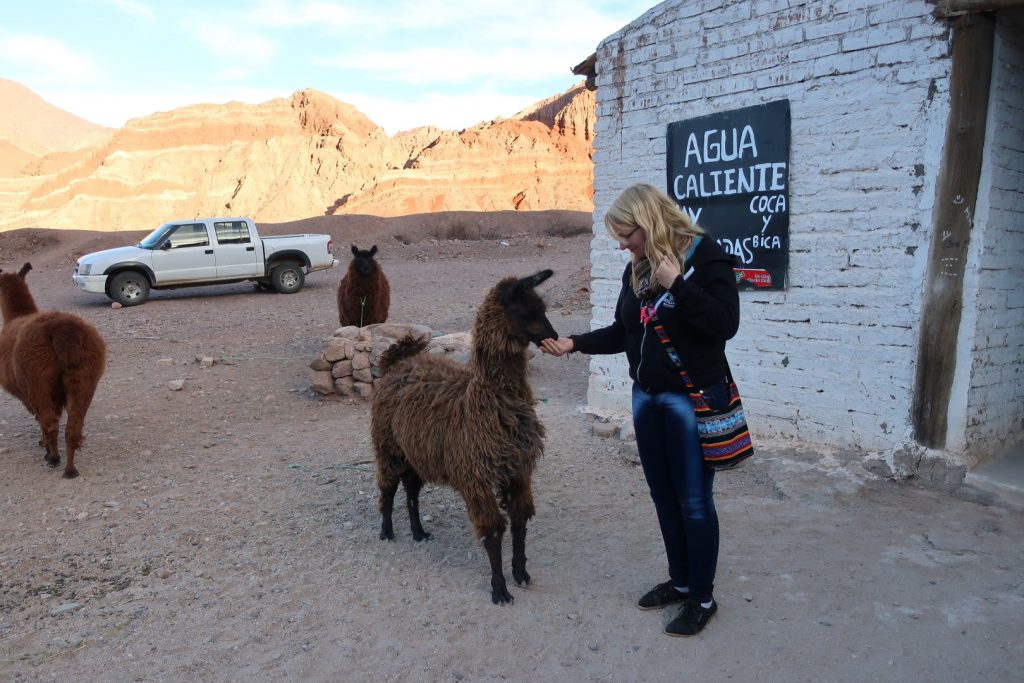 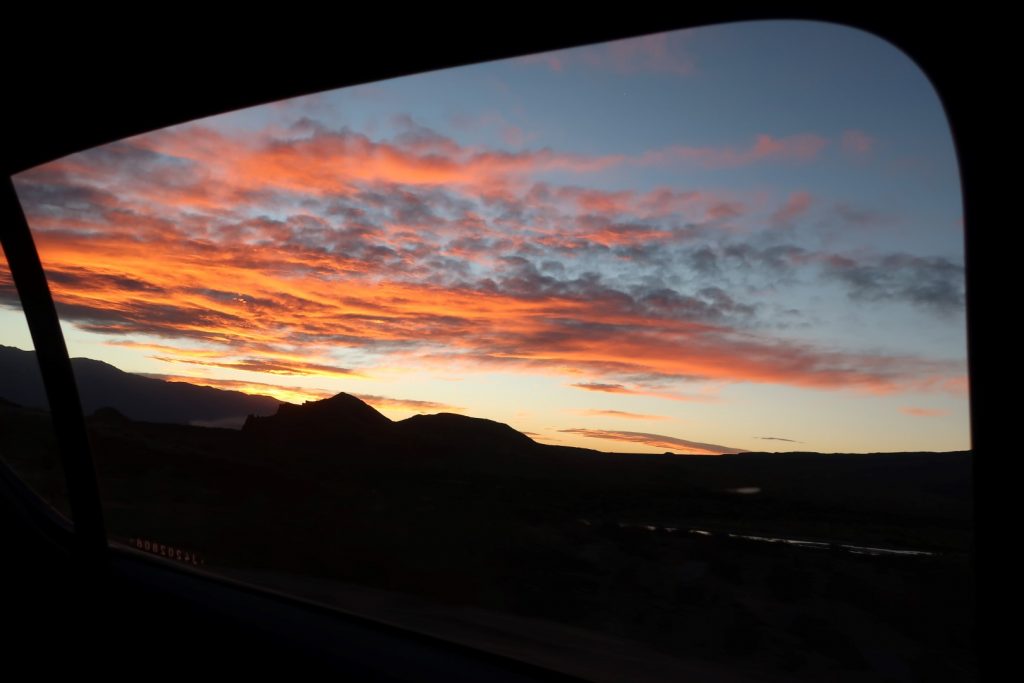 After a while we got a little nervous, it is already 5pm and we still had about an half an hour to go to Cafayate. We were already driving 3 hours, although we hade stopped multiple times. At 8 pm we needed to get the car back, cleaned and fueled up.

We didn’t really want to head back, and since it was off-season, it wouldn’t be a problem to extend out car rent for one day.

Desperately we tried to find a phone, since there was no signal at all. That didn’t work out, the next phone they had was in Cafayate.

At about 6pm we reached Cafayate and found a payphone from where we could call the car rental company.

I talked to the nice employee and asked if we could extend the car for another day. He told me that is unfortunately not possible, since the car is already rented out to someone else tomorrow.

So I asked what we should do, since we are in Cafayate and not really sure if we can make it back by 8pm.

It seemed like this statement was not really what he wanted to hear, since he answered in a rather unfriendly, angry tone: You can’t just go and call me FROM CAFAYATE at 6 pm in the evening, to tell me that you need the car longer, when you can in no way make it back in time!

I told him that we are sorry, but there is not much we can do about that now, and how he proposes that we can solve this problem. He told us we should be there with the car at 8:30am sharp, and no minute later, with a CLEAN AND FULLY FUELED (!!!!) car. Additionally we have to pay for one more day since we failed to bring the car back on time.

Well that worked out quite well. Our plans to spend some time in Cafayate and to sleep there for one night were kind of eradicated then and we had to head back.

On the next day at 7am we went to a car wash place, so that we can get the car back on time. What we didn’t know is that they clean very thoroughly by hand, so the car was done at 8:15 am (Even after we tried to tell them a couple of times to please not polish the rims of the wheel).

But we weren’t far away from the rental company and according to MapsMe, there was a gas station on the way. Unfortunately MapsMe was wrong, and there was none. The second gas station MapsMe proposed to us, was also not existent. I was getting more nervous by he minute and we had to go back to a gas station we have seen the day before, just because we could be sure that there was one there.

We arrived at the rental company at 8:50am. But instead of being screamed at (again), the employee was sweet as candy and said: You are on vacation, shit happens, but we don’t have to stress ourselves. He was also so impressed by the cleanness of the car, it seems to have never been as clean as this.

He even asked us for the name of the car wash and after all this stress, we were pretty happy to be rid of the car.

What a ride this trip was!